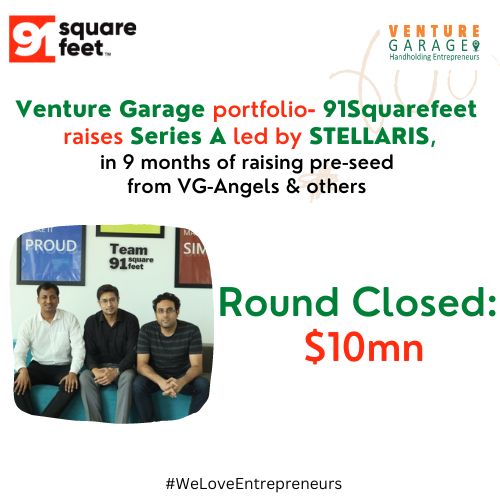 Venture Garage portfolio company- 91Squarefeet raises Series A of $10 million led by Stellaris, in 9 months of raising pre-seed from VG-Angels.

13th September 2022: Gurugram based 91Squarefeet, a retail store development (Construction tech) company raises $10 million in a Series A round led by Stellaris Venture Partners.  Other investors include Y Combinator, Betatron Venture Group and angels. Venture Garage is both an investor and the financial advisor to 91Squarefeet through their fund raises.

Amit Bansal, Amit Mishra, and Puneet Bansal founded 91Squarefeet in 2018 to help brands open new physical stores. The funds will be used by 91Squarefeet to strengthen its on-the-ground service and product development teams, as well as to deepen its engagement with its supplier network.

“91Squarefeet digitizes the supply chain around retail projects, reduces friction in collaboration and information exchange amongst stakeholders. In India, there is no direct competition for the startup as of now and that it competes with unorganized contractors and agencies as well as pits against a few big names in certain segments,”

“Venture Garage began its journey with 91Squarefeet in mid-2021 and assisted the startup in raising a $1 million pre-seed round from VG-Angels, Omphalos Ventures India, Nikhil Vora of Sixth Sense Ventures, actor Rannvijay Singh Singha, and others.

The business was also chosen for the W22 cohort of Y-Combinator. This helped our efforts to raise further capital as financial advisors. With the help of this round, 91Squarefeet is poised to grow significantly over the next several months, and we are thrilled to work with the team as they change the way offline retail outlets are built,”

In the nine months since its last funding round, the startup has expanded to 700+ stores from 500 and 40 brands from 20 across over 230 cities. Currently, the company works with over 600 contractors and factories. Bridgestone, Yokohama, DHL, Tata, Chaipoint, Ceat and Pepperfry are some of the clients of 91Squarefeet, which is now planning to deepen its presence in markets it already operates.

Without sharing the exact figures, Amit said that the southern market rakes in the most revenues for the startup, followed by the Western markets of Gujarat and Maharashtra.

“Demand for organized retail is growing, more so in tier II and III cities. However, a majority of brands struggle to expand their offline presence and tap into this massive opportunity. High dependence on small, unreliable suppliers often create inefficiencies leading to a 20-25% higher cost of building a retail store along with several weeks of delay. 91Squarefeet’s tech-enabled platform solves this very pain point, providing brands with a timely and cost-effective way of building their stores,”

This story was originally published at https://www.vccircle.com/91squarefeetbags-10-mn-in-series-a-round